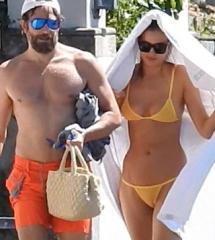 ) is expecting her first child with Bradley Cooper.

Publicists for the couple have not confirmed the pregnancy. However, Shayk is reported to be in her second trimester.

The pregnancy didn't stop the 30-year-old model from strutting her stuff at the Victoria's Secret Fashion Show in Paris this week.

She walked the runway keeping her stomach somewhat covered up in an unbuttoned tasselled jacket over the lingerie. Irina then changed into a racy red lingerie that also hid her stomach while showcasing her posterior in a thong.