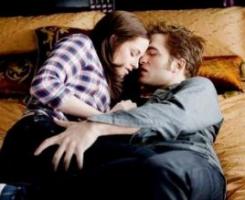 The CBS station in Sacramento is reporting that watching 'Twilight: Breaking Dawn' may trigger a seizure.

Not because the film is "tedious and toothless," as slammed by one critic, but because the intense birthing scene -- which contains flashes of red, black and white -- may cause an episode of photosensitive epilepsy.

"It's like a light switch going off, because it hits your brain all at once," explains Dr. Chez said.

"The trouble with theaters, it's dark, the lights flashing in there is more like a strobe light, It especially affects those who are genetically predisposed."

In fact, one moviegoer had to be taken to emergency by paramedics after he sudden began convulsing during the scene.

"He scared me big time," says Kelly Bauman, the young man's girlfriend. "He was convulsing, snorting, trying to breathe."

After the frightening episode, Kelly told the station that "Brandon has fulfilled his duty as a boyfriend and won't need to see any more 'Twilight' movies with her."