Iggy Azalea Responds To Halsey Calling Her 'A F--king Moron' 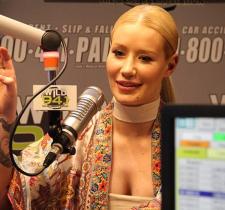 Iggy Azalea is hitting back after Halsey called her "a f--king moron," saying the singer "had a complete disregard for black culture."

Speaking with Australian radio show 'Smallzy's Surgery' on Tuesday about her new single 'Switch', Azalea said: "It's a bit weird to bring someone up in an interview that you weren't asked about."

"I don't know her. I've never met her. So I thought it was a bit strange to just throw that out there."

"I'm a famous person, obviously, and I know a lot of the time people have opinions and they're not always accurate," she said. "I really try very hard not to give my personal opinions about people I don't know."

Iggy Azalea instead turned the tables and said the 22-year-old Halsey had a lot to learn.

"She's young and I hope that she learns to be a bit less judgmental," Azalea said. "I'm sure she's getting judged all the time as well by people who don't really know her."

"So I think maybe it would be good for her to just try to be a little more empathetic to other people who are in the same situation."