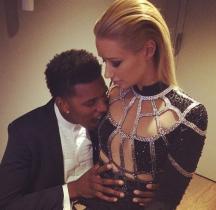 Iggy Azalea is telling her fans not to believe rumors that she kicked ex Nick Young out of the house and had his car towed.

"I never had anyone's car towed nor did I kick nick out of 'my' house," she explains on Twitter.

"The home belongs to Nick, I am the one moving."

Azalea had gifted the Lakers player the 1962 Chevrolet Impala as a Christmas present in 2014. They became engaged after Young proposed on June 2015.

However, their relationship was rocked earlier this year after Young admitted to cheating on his fiancee in video leaked by teammate D'Angelo Russell.

Azalea gave Young a warning that she would cut off his penis if he cheated on her but officially broke it off this week.

"Unfortunately although I love Nick and have tried and tried to rebuild my trust in him — it's become apparent in the last few weeks that I am unable to," she said.

"I genuinely wish Nick the best. It's never easy to part ways with the person you planned your entire future with, but futures can be rewritten and as of today mine is a blank page."