Idina Menzel: Travolta's Adele Dazeem 'Best Thing That Ever Happened To Me' 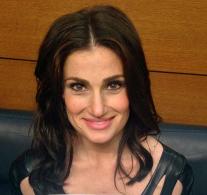 Travolta's introduction, in which he seemed to refer to the singer as "Adele Dazeem," almost immediately became fodder for jokes.

But Menzel, who said she was extremely nervous before the performance, didn't think it was all that bad.

"It was quite demoralizing for about eight seconds," the 'Frozen' singer said. "I felt so sorry for myself. I thought this is my opportunity and he just wrecked my name."

"And then I said: Get over yourself. You're at the Oscars. You have this amazing song and you can back it up and sing it live. Just do your thing and forget about that."

"So it took me about eight seconds... and then I did my thing and then Ellen (DeGeneres) was really nice and she kept repeating my name so the world would know it and now it's the best thing that ever happened to me."