Ice Cube Explains His Moniker and Gives One To Stephen Colbert 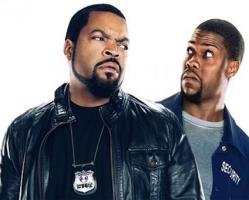 Ice Cube explains the origin of his hip-hop nickname and then gives Stephen Colbert his very own nickname.

"My brother gave me that name," he explained. "He's older than me so I used to try to talk to his girlfriends when they called. He got tired of it."

"You know back in the days when they had an old refrigerator you'd push it back to the curb and guys would come by and pick it up."

"My brother was like 'Yo, that refrigerator down the street, I'll take you down there, slam you in the freezer and when they pull you out, you gonna be ice cube.'"

"That day when I went outside, I told everybody my name was Cube. Just call me Ice Cube. Now the joke's on you, Clyde!"

Cube advised Colbert not to go with something weak and really get into it.