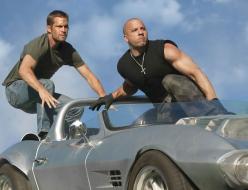 After saying he felt "robbed" losing to late actor Paul Walker, Ice Cube now says he "wasn't really mad" and didn't mean to suggest that the actor didn't deserve it.

In an interview soon after, Ice Cube said: "We was robbed. Shame on you MTV."

But after criticism from several circles, the actor says he wasn't attacking Walker and suggests his words were misinterpreted.

"I wasn't really mad we didn't win. So I would never diss the actors who won. Not even Paul Walker. Seriously people!," he writes in a series of posts on Twitter. "Don't believe the hype."

"We should honor people before they die. That's all. Shame on you 'make something out of nothing' a-- reporters. Ice Cube is not a sore loser. I was born losing. This winning sh-t is what I gotta get use to."

"Last tweet and I'mma leave it alone. Remember this: A lie travels further then the truth. Damn the devil is busy," he says. And Paul Walker fans don't trip. I was a fan too."