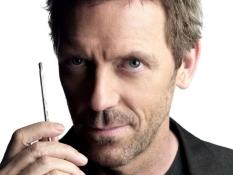 With ABC, NBC, CBS and Fox asking for looser indecency standards so they can regain some of the "cultural clout" they've lost to cable networks, Hugh Laurie and Stephen Colbert give them a taste of what they're missing.

The two read from a list of terms that are approved by Viacom, Comedy Central's owner, but can't be said by the over the air networks.

"It is words such as these that the broadcast networks are spending vast amounts of time and money to have the legal right to say on our nation's airwaves," says Colbert.

Hugh Laurie enters around the 2:40 mark: