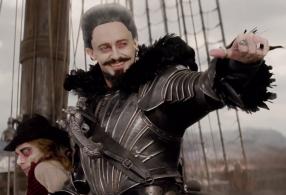 With a very 'Harry Potter'-esque vibe to start the trailer, the story begins before Hook turned bad so Jackman, who is almost unrecognizable with a beard and mustache on a pale face, is the villain of the story.

) as Pan's mother, Rooney Mara as Tiger Lily, Garrett Headland as Hook and Levi Miller as Peter Pan himself.