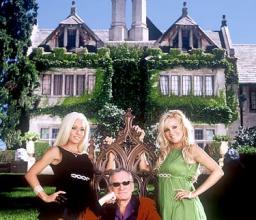 A wealthy businessman who lives next door is buying the Playboy Mansion for more than $100 million.

Not a bad return for a property bought by the magazine in 1971 for just over $1 million. It's built on 5 acres with 29-rooms including a home theater, wine cellar, game house, gym, tennis court, swimming pool, guest house and even a grotto.

The iconic site located in Los Angeles was listed in January for $200 million. However, that was believed to be wildly overpriced at the time with a nearby property sold last year for $59 million.

The property was advertised as a 20,000 square foot "ultra-private retreat and the ultimate setting for large-scale entertaining."

Playboy has confirmed that Daren Metropoulos' bid to buy Hugh Hefner's home is in escrow. The terms of the sale will allow the 90-year-old Playboy founder to live in the mansion until his death.

"The heritage of this property transcends its celebrity, and to have the opportunity to serve as its steward would be a true privilege," he tells the Wall Street Journal.