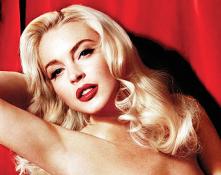 Hugh Hefner says he had to push Lindsay Lohan (photos

) to reveal even as much as she did in her photo shoot for Playboy.

"I think it was essentially mama and the folks around her that kept pushing for less nudity," Hefner explains in his first interview since the issue.

Some critics have labelled the Marilyn Monroe-inspired photos, which feature the 25-year-old with in retro-style blonde waves and red lipstick wearing only pair of a pumps, as bland.

But despite the complaints, and a reshoot, Hefner says he's happy with how the photos looked.

"I think it was accomplished beyond anything I could have possibly imagined."

Hefner says a reshoot was required because the first set of photos weren't as flattering or polished as he wanted.