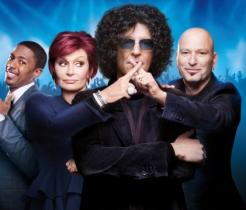 Howard Stern said on his radio show on Monday that he will be back for a second season on 'America's Got Talent'.

"I'm very, very excited, honestly, about going back to 'America's Got Talent,'" said Stern. "I'm very excited to be working again with executive producer Simon Cowell and NBC and all the various folks who work there."

Although Howie Mandel has not confirmed whether he will return and Sharon Osbourne has openly said she does not intend to continue, the radio host says that doesn't bother him.

"If I don't like the new judge, I'll hit the 'X' on the judge while they're talking," Stern said confidently.

"I'll be like, 'Shut up, no one wants to hear from you.' Believe me, if I was the only judge, I think the show would be terrific. You don't need the other judges, but all right. I've got to learn to play with others."