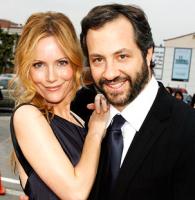 Howard Stern is lashing out at Judd Apatow for complaining about all the 'America's Got Talent' talk on his radio show since he joined the talent competition.

"'The Howard Stern Show' has become impossible to listen to since he got a job as the new judge on 'America's Got Talent,'" Apatow complained on Twitter.

"I hate to say it, but I don't have much interest in discussions about 'America's Got Talent.' I tried. It is just too much synergy."

The producer has previously admitted to being a longtime listener to Stern, in fact, since 1982.

But that didn't stop the radio jock from going after him for the comment on Monday.

"Robin was with me over at AGT, which Judd Apatow says I shouldn't talk about because he's such a genius. He tweeted his opinion," began Stern.

"I shouldn't talk about America's Got Talent? I spend half my life there, he doesn't want me to talk about it? Hey man, do I talk about that last shitty film you made? I keep it to myself."

"His criticism of me talking about AGT is that I go on and on. You ever see the movie 'Funny People'? Talk about going on and on."

"You know, I don't put my wife in every project I do either."

"And if you're not down with it, get the f--k off my channel," said Stern. "That's all. Anyway, that kind of ticked me off."