'How I Met Your Mother' Reveals The Mother On Season Finale 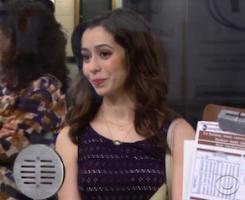 In the very last scene of last night's eighth season finale of 'How I Met Your Mother', fans of the series finally got to meet the titular Mother as she purchased her train ticket to Farhampton for Barney and Robin's wedding, where she will eventually meet Ted.

But with next season being the last for the CBS comedy, expect Milioti to join the cast as a regular with her star turn as Girl in the Broadway musical 'Once' just concluded.

"It was a pretty big umbrella to fill, casting the title role in a series that's been on the air for eight years," executive producer and co-creator Carter Bays tells us.

"And yet Cristin Milioti is, against all odds, exactly what we were looking for. She made us laugh on '30 Rock', she made us swoon in 'Once', and her ukulele skills are no joke."

"We're thrilled to welcome her to the How I Met Your Mother family, and look forward to getting to know her – and the character she plays – much better in the coming final season."

"And to all the fans, on behalf of all of us writers, cast and crew: Thank you for sticking with us on this wild journey. Our ninth season will tell the epic story of the longest wedding weekend ever. We hope you like it. Next stop, Farhampton."

The brief scene was shot at the end of March at the Twentieth Century Fox lot in Los Angeles with her casting and filming kept secret from the majority of the crew.

In case you missed it, see Cristin Milioti's introduction below: