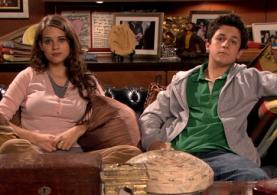 'How I Met Your Mother' may finally be wrapping up this season but producers have revealed that they filmed the show's final moments eight years ago.

The comedy, that began with Josh Radnor's character, Ted, telling his children how he met their mother, ends with a one-hour series finale on March 31.

During the CBS comedy's early days, it wasn't clear that the series would last this long but what producers realized was that they needed to film the children, played by David Henrie and Lyndsy Fonseca in the first season, before they grew up.

Since they already knew how they wanted to end the series going back to the children on the couch, series co-creators Carter Bays and Craig Thomas filmed the secret ending in 2006 with a closed set and just one camera operator.

They had the actors sign non-disclosure agreements and filmed a few scenes to give themselves a little bit of flexibility but the key idea remained the same.

Now years later, Bays and Thomas say they are glad they thought ahead. Even though they admit keeping the series going for nine seasons hasn't been easy.

Just this week, the comedy received criticism for an episode that featured its actors in outfits, makeup and faux accents in an attempt to depict Asians.