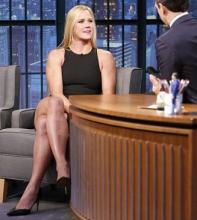 In a conversation with Seth Meyers on 'Late Night', Holly Holm relives the moment she knew she was going to beat Ronda Rousey for a UFC title win.

Almost the polar opposite of Rousey in terms of personality and style, the leggy Holm is ice cool and matter of fact about defeating her tough opponent.