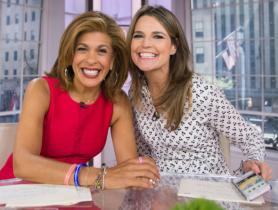 Hoda Kotb may have officially landed her dream job of co-anchoring the 'Today' show but she's not getting paid like her famous predecessor.

Kotb will take over Lauer's chair after he was abruptly fired by NBC following sexual misconduct allegations.

Lauer was reportedly earning $20 million as part of his recent two-year contract. However, Kotb told People that she isn't making "Matt Lauer money. Not even close."

"The answer is no... that's not happening," she said. "For either of us," Guthrie added.

"I know it sounds ridiculous that I'm going to say this, but I really have done jobs I liked for the job I liked because I never wanted to be happy every other Friday on pay day. Like, I didn't want that to be the happy day," Hoda explained.

But before you start feeling bad for Hoda, Page Six reports she is making $7 million a year.