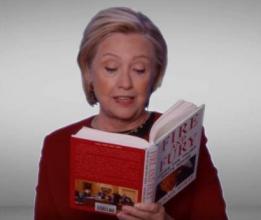 Clinton's face is covered by the book when she first appears on screen in the pre-taped sketch.

She read the line about Trump's love for fast food: "He had a longtime fear of being poisoned. One reason why he liked to eat at McDonalds. No one knew he was coming and the food was safely pre-made."

Nikki Haley, Ambassador to the United Nations, wasn't happy with the sketch.

"I have always loved the Grammys but to have artists read the Fire and Fury book killed it," Haley said on Twitter. "Don't ruin great music with trash. Some of us love music without the politics thrown in it."

Haley has denied that she's having an affair with Trump, as alleged by the book's author Michael Wolff.