Hillary Clinton Thinks She Would Beat Bill Clinton In An Election 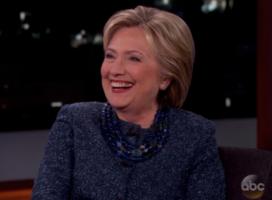 In an appearance with Jimmy Kimmel, Hillary Clinton talks about what her husband, former President Bill Clinton, would be called if she became the Commander-in-Chief.

The choices run from first dude and first mate to first man.

"We have to really work on what to call him," she quipped.

While Clinton could become the first female president, she laughed her husband is determined to break the "iron grip" that women have had on being the spouse of a president.

Clinton also boldly said she thought she could beat the two term president if she ran against him.

But Hillary joked there's still one issue she isn't willing to willing to take up with her husband: the control of the TV remote.

The Democratic candidate also recalled the time a White House operator wouldn't put her call through because she didn't believe it was really her.