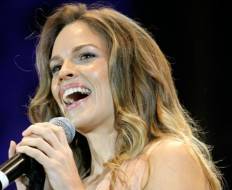 Hilary Swank has fired her longtime manager, Jason Weinberg, and CAA agents, Amie Yavor and Josh Lieberman, after the backlash she received for attending a party for Chechen President Ramzan Kaydrov.

Swank was criticized by Human Rights Watch for attending a show that "trivialized the suffering of countless victims of human rights abuses."

But the actress said she didn't know the event was for a man who has been accused of torture, abductions and killings.

Swank apologized and announced she would give all fees that she received for attending the controversial celebration to various charitable organizations to show she "deeply regretted attending this event."

Now word comes that the Oscar-winner, who learned that her manager and CAA agents committed to the event despite repeated warnings from human rights groups, has fired them.

"We offered to brief her," explained Human Rights Foundation's Sarah Wasserman. "But her manager cut us short and responded that Hilary had no plans to attend."

Swank has won Oscars for her roles in 'Boys Don't Cry' and 'Million Dollar Baby'.