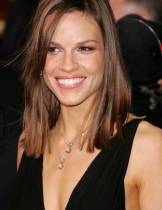 Swank and Jean Claude Van Damme were criticized by Human Rights Watch for attending a show that "trivialized the suffering of countless victims of human rights abuses."

During the bash, Swank said she was inspired by the Chechen government's "passion to make peace and to make something beautiful."

But Swank says she didn't know the event was for Kadyrov, who has been accused of torture, abductions and killings by various human rights groups around the world.

"I deeply regret attending this event, which has thrown into question my long and deeply-held commitment to the protection of human rights," the 37-year-old says in a statement.

"I would never intentionally do anything that raised doubts about such commitment. I will continue to donate my time and my financial resources not only to the charities with which I am currently affiliated, but also those dedicated to the preservation of human rights."

"If I had a full understanding of what this event was apparently intended to be, I would never have gone."

) were also invited to the event but, wisely, declined the invitation.

See video of Hilary Swank and Jean Claude Van Damme at the event below: