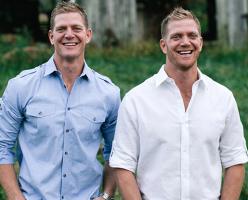 HGTV has cancelled 'Flip It Forward' after it surfaced online that the show's hosts, twin brothers David and Jason Benham, had voiced controversial anti-gay and anti-abortion views.

"HGTV has decided not to move forward with the Benham Brothers' series," the network says of the upcoming show.

The move comes after a website brought attention to the pair's views, labeling David Benham as an "anti-gay, anti-choice extremist", and pointed out they are the sons of right-activist Flip Benham, the director of Operation Save America, which arranges abortion clinic protests.

The site posted a recording in which one of them complains "homosexuality and its agenda that is attacking the nation" with its "demonic ideologies."

In a statement the Benham brothers said they were "saddened" by the network's decision to cancel their show over their beliefs.

"With all of the grotesque things that can be seen and heard on television today you would think there would be room for two twin brothers who are faithful to our families, committed to biblical principles, and dedicated professionals," read the statement. "If our faith costs us a television show, then so be it."

"The first and last thought on our minds as we begin and end each day is: have we shined Christ's light today? Our faith is the fundamental calling in our lives, and the centerpiece of who we are. As Christians we are called to love our fellow man. Anyone who suggests that we hate homosexuals or people of other faiths is either misinformed or lying."

"Over the last decade, we've sold thousands of homes with the guiding principle of producing value and breathing life into each family that has crossed our path, and we do not, nor will we ever discriminate against people who do not share our views."

On CNN Thursday night, David Benham explained: "Never have I ever spoken against homosexuals, as individuals, and gone against them. I speak about an agenda. And that's really what the point of this is -- is that there is an agenda that is seeking to silence the voices of men and women of faith."