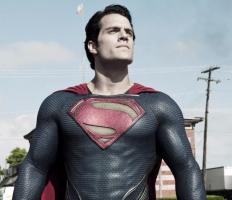 'Man of Steel' director Zack Snyder and wife Deborah, who serves as producer on the film, talked about why they decided to cast Henry Cavill as Superman at the film's New York premiere.

"He's not horribly ugly. He wasn't in bad shape. And then he's a great actor," says Snyder. "But he also has this other thing, this kind of earnest awesomeness that's unexplainable. And that's what you look for."

"I think with Superman you can't hope for anything more than to have that extra thing that makes him special."

But Deborah reveals that it was actually Christopher Reeve's Superman suit that sealed the deal.

"The clincher was our suit wasn't ready so we were doing a screen test. And we put him in the old Christopher Reeve suit 'cause it's all we had," she explains.

"And even though that suit was many years old, he put it in and stepped out of that trailer and everyone was in awe of him. And we knew at that moment that he was our Superman."

Snyder also touched upon the often made comparison that Superman is Jesus.

"I think the relationship between Jesus and Superman is not a thing we invented in this film, it is a thing that has been talked about since the creation of Superman," he says.

"And in a weird way, probably was talked about more when Superman was created than it is now. It's one of those things mythologically you take for granted, a little bit."

"But by no means is it for one idea to cancel out the other, or for it to be mutually exclusive to one single idea. I think it's drawing on all mythology: comic book, religion, ancient, philosophical."

"We didn't come up with these allusions of Superman being Christ-like, that's something that's been embedded in the character from the beginning," adds screenwriter David Goyer. "But also the legend of Moses, clearly the whole way his parents give him up and send him…"