Heidi Montag Now 'Desperate' To Have Her Breast Implants Removed 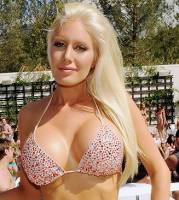 A week after the death of her plastic surgeon, Heidi Montag (photos

) says she regrets having plastic surgery.

Montag underwent a much publicized cosmetic surgery spree that included 10 procedures performed in one day.

But the former 'Hills' star says she now regrets her F-cup breast implants, and wants to have them removed.

"I'm desperate to go back to normal," the 23-year-old tells 'Life & Style' magazine. "I'm downgrading and going a little smaller, to a D or a double D."

Montag says she is still in pain from the breast augmentation, even though it's been roughly nine months since she the procedure.

"I have major anxiety about it," she admits. "I was taking painkillers but they weren't working, so I stopped. It hurt either way."

She also complains that she's been unable to work out and can't even wear anything off the shelf since she got her new assets.

"I'm obsessed with fitness but it's impossible to work out with these boobs," Montag says. "It's heartbreaking. I can't live an everyday life."

With the death of Dr. Ryan, Montag says she's afraid that she may be stuck with her choices forever.

"I feel trapped in my own body," she says. "There's just no fixing it. Dr. Ryan knows the work he did, he knows everything."