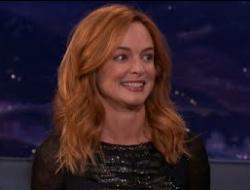 Heather Graham gave a disclaimer that she's a feminist because delivering a joke about two sperm on route to a uterus.

"There are these two sperm and they swimming and they're swimming and the one sperm says to the other sperm: 'I'm so tired. Have we reached the uterus yet?,'" says Graham.

"And the other sperm says 'The uterus? We haven't even reached the esophagus.'"

"My defense is that I don't get it," quipped Conan after taking a moment to enjoy the joke.