Hayden Panettiere Not Asked To Return For 'Heroes: Reborn' 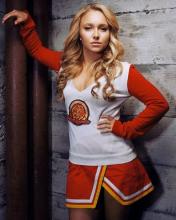 ), who played Claire Bennet for all four seasons on NBC's 'Heroes', says she hasn't been asked to return for the show's recently announced miniseries.

"It was a shock to me," the Nashville star tells Cosmopolitan.

"In fact, I believe I became privy to that through my cousin. She sent me a text message and told me about it."

"I mean, we had nothing, nothing to do with it. It will definitely be interesting to see how they reinvent that."

'Heroes: Reborn', scheduled for 2015, is expected to feature a mix of both returning and new characters.

"I think it's a whole new set of characters," she says. "Who knows? It's a little bit of an interesting feeling because you go, 'That was our show, our home, our family,' something that we had a major part in creating as well."

"And, I mean, I hope that they don't have somebody else playing our characters, that would be a little dagger in the heart. But, you never know. I wish them success in it, for sure."