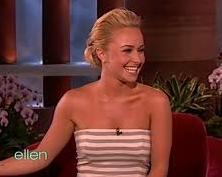 Just over a month after announcing her engagement to Wladimir Klitschko, Hayden Panettiere (photos

) is wondering what children with the 6'6" Olympic boxer would look like.

"I've known him since I was 19, so I've known him five years," Panettiere told Ellen DeGeneres about getting engaged. "It's been a while now. He's a good dude, and he's huge."

"God's telling us we're too far on either end of the spectrum," she laughed. "He needs to make normal people. He's got bowlegs. I've got knock knees. Our kids are gonna have straight legs and be normal height."

Panettiere said they're planning the wedding but Klitschko is "very confused about our traditions."

"He asked me 'What is this honeymoon?'. I said, 'It's when you go on a vacation afterwards. You also can't see the bride in her dress before. He asked 'Why not, it's a dress.'"

"But he doesn't know the woman's side of the family is supposed to pay for the wedding. So shh. We don't need him to know that!"

Panettiere also recalled a private moment during which she received a call from 'Ellen's producer with questions about her upcoming appearance on the show.