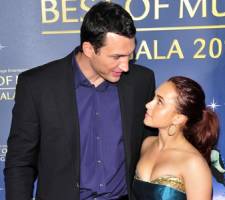 The 24-year-old made the announcement and flashed her ring in an appearance on 'Live with Kelly and Michael' on Wednesday.

Unlike the last time, when she scared Michael Strahan with a fake snake, she wore a live boa constrictor around her neck.

"It's my new scarf," she joked. "I think it's time for you to rehab this little situation."

"The bigger the less scary, right? Gentle giants," the 5'2" star said in a comment that could be taken about the 6'6" Klitschko as much as the reptile.

"I'm sort of distracted, not just by the snake, but there's a very large diamond ring on your ring finger," said Ripa.

Panettiere then announced the engagement and said she first met the 37-year-old Olympic boxer at a party and dated for two years before they split. They reunited this past spring.

"It's like the 2.0 version," she told Glamour of their relationship earlier this year. "I've always had great relationships and stayed really good friends with the guys I've dated."