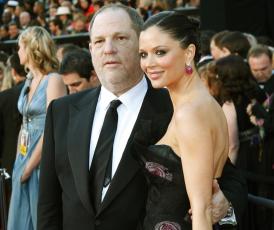 Harvey Weinstein's wife of a decade has announced she's leaving him after accusations, including that of rape, continue to mount.

"My heart breaks for all the women who have suffered tremendous pain because of these unforgivable actions," she says in a statement. "I have chosen to leave my husband. Caring for my young children is my first priority and I ask the media for privacy at this time."

The announcement was made hours after the New Yorker alleged that, along with sexual harassment, Weinstein had raped multiple women with accounts from some of them.

However, it was likely Gwyneth Paltrow (photos

) who helped seal the fate of the studio mogul.

The actresses added their names to the list of women at the receiving end of improper advances from Weinstein.

Paltrow said at the age of 22, after she had been cast as the title character in the adaptation of Jane Austen's 'Emma', she was summoned to Weinstein's hotel room, where he proceeded to touch her and suggest a massage in the bedroom.

Jolie also remembered Weinstein making advances in a hotel room early in her career and said she never worked with him again.

A spokeswoman for Weinstein has denied the rape allegations.

"Any allegations of non-consensual sex are unequivocally denied by Mr. Weinstein," the statement reads. "Mr. Weinstein has further confirmed that there were never any acts of retaliation against any women for refusing his advances."

Weinstein has already been fired from his own company and is reportedly heading to rehab.