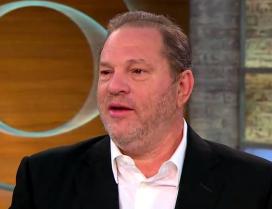 An unnamed actress, who is represented by attorney Gloria Allred, is suing Harvey Weinstein and his production company.

The actress, listed as Jane Doe filed a lawsuit against the disgraced producer, claims he masturbated in front of her in 2015 and raped her in 2016.

Jane Doe says that she first met Weinstein in 2011 and kept in touch over the years after the producer offered to help with her acting career.

"In March 2015, Plaintiff met Weinstein at the Montage Hotel in Beverly Hills, California to discuss a prospective acting job on a television show called Marco Polo as well as acting in two to three other projects," she writes in the suit.

A year later Weinstein contacted her and said he wanted to meet at his hotel.

"In early spring of 2016, Weinstein contacted plaintiff again to meet with him at The Montage Hotel in Beverly Hills to celebrate her upcoming role in Marco Polo giving her the impression that she had been chosen for the part. Plaintiff agreed."

"Before plaintiff could leave, Weinstein grabbed her and pulled her into the bedroom. Plaintiff told Weinstein that she did not want to do anything sexual with him."

"Weinstein forcefully threw Plaintiff onto the bed. He pulled down her jeans and started to orally copulate her. Plaintiff pushed Weinstein's head off of her and told him, 'Stop!'"

"Plaintiff finally broke free from his grasp and immediately left the bedroom and suite."

A statement from Harvey Weinstein's spokesperson continues to insist that: "Any allegations of non-consensual sex are unequivocally denied by Mr. Weinstein."

After the incident, Weinstein called her "and acted as if nothing had happened." She "swore at him and hung up the phone."

The woman is also suing The Weinstein Company because she says the company was aware of Weinstein's actions.