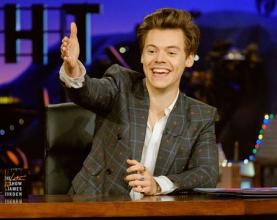 Harry Styles steps in to guest host after James Corden had to head to the hospital for the birth of his daughter.

The 23-year-old singer told the audience: "I actually have some great news. Just half an hour ago, James and his wife Jules had a beautiful baby girl."

Styles kicks off the show with a monologue about the Alabama special election with Roy Moore and President Trump's plan to get back to the moon.

"I was just at the hospital before I came to fill in and she looks a lot like James — mainly because James looks like a giant baby," he jokes.

He also asked guest Owen Wilson about wanting a rematch with Usain Bolt.