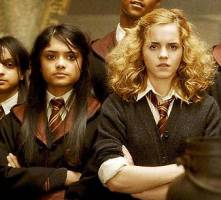 The brother of an actress from the 'Harry Potter' movies has pleaded guilty to attacking her because she was dating a non-Muslim.

The 28-year-old Ashraf Azad could now face jail time for the assault of his sister, 22-year-old Afshan Azad, who played Harry's classmate Padma Patil in the films.

But Ashraf and father Abdul were cleared of threatening to kill her after the 22-year-old actress refused to testify against them, fearing her life would be in "genuine danger."

Ashraf, who is due to be sentenced on 21 January, was bailed on condition he lives at the home address, does not contact his sister and does not travel to London.

"Domestic violence can result, even for a man such as you, in imprisonment," warned Judge Roger Thomas.

The court was told Afshan, whose family is Muslim, was assaulted and branded a "slag" and "prostitute" for dating a Hindu man. The actress fled through her bedroom window to escape her brother, and later accused him and her father of threatening her life.