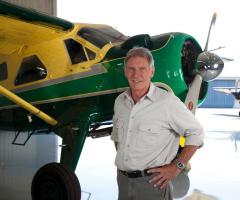 Harrison Ford was "battered" and hospitalized Thursday evening after being forced to crash land the vintage plane he was flying on a golf course.

The sole engine lost power and, in a recording, the veteran actor is heard alerting the airport's control tower: "Engine failure; immediate return."

Ford was then forced to land blocks from the runway as the plane clipped a tree at the Penmar Golf Course in Venice and landed on a fairway.

"He had no other choice but to make an emergency landing, which he did safely," Ford's publicist, Ina Treciokas, said in a statement.

"He was banged up and is in the hospital receiving medical care. The injuries sustained are not life threatening, and he is expected to make a full recovery."

"Dad is ok. Battered, but ok!" the actor's son, Ben Ford, said. "He is every bit the man you would think he is. He is an incredibly strong man."

Ford may be safe but the landing has once again ignited debate over the location of the airport, which is in the middle of a densely populated community.

The incident also reminds us of this scene from 'Indiana Jones and the Last Crusade':