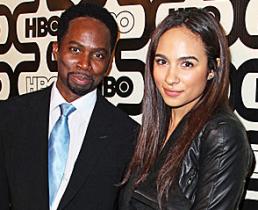 'Lost' alum Harold Perrineau is finally speaking out, weeks after his daughter accused a 'Girls' writer of raping her.

Perrineau's daughter, Aurora, has alleged that Murray Miller raped her in 2012, when she was 17 years old. Miller has denied it.

"And I realized, I'm not watching some victim here, I'm in the presence of a warrior. A real life crime fighter who is unafraid to look boldly at some coward who hoped to abuse her and say, no."

Aurora, now 23, filed a complaint with the Los Angeles County Sheriff’s Office that she was 17 when she met Miller at LA's Standard Hotel with friends. After consuming "some alcoholic beverages" she alleged Miller asked them for a ride home and she awoke naked in his bed, where he was allegedly having sex with her.

"So to every other person that is fighting back, I say thank you for all of your support, and I stand with you. I fight beside you."

He then warns: "Lastly, to all of you out there that think you can get away with your abuse, to you and all of your friends with 'inside information' or outside influence, I say, let's let the police do their job. But you should know this... YOU HAVE FU**ED WITH THE WRONG FAMILY!!! WE STAND UP!!!"