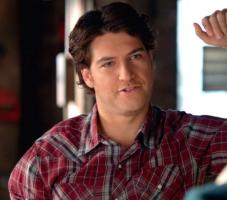 Adam Pally has been arrested and charged with possession of cocaine and marijuana in New York.

Pally faces a criminal possession charge for cocaine and marijuana after being arrested in the Hell's Kitchen neighborhood of Manhattan.

Pally is set to appear in court in June. He's best known as Max Blum from ABC's 'Happy Endings'.

He also has a recurring role on 'The Mindy Project' as Dr. Peter Prentice.