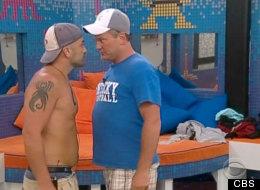 The brother of infamous 'Survivor' all-star Russell Hantz was booted from the 'Big Brother' house last night after a violent outburst.

Willie Hantz appeared to be taking responsibility for his actions after finding himself alienated by his teammates, following the war of words with Frank last week.

But with Frank now Head of Household and team captain Britney telling the rest of her team to stay away from Willie, who she called a "time bomb," the Hantz brother blew up.

Willie went after his teammates and called Britney a "bitch." After Joe stepped in and told Willie he was a "p-ssy," the 34-year-old Dayton, Texas resident snapped.

He started yelling "hit me, hit me" before he chest bumped himself into Joe, who went flying back.

Willie was then called into the Diary Room by producers and executive producer Allison Grodner informed the rest of the cast that "violence is not tolerated" and Willie was out of the game.

Due to the added drama, the episode didn't even make it to nominations and Willie's picture faded to black and white on the Memory Wall to make his exit official.

Soon after the episode, Russell Hantz told his brother he should've at least taken a swing at Joe if he was planning on being removed from the game.

"I say if you're going to get kicked out then punch him in the face!!!," the 'Survivor' villain said.

"Sorry to let you down," Willie replies on Twitter. "I was going to then when I saw he shit himself I started to feel sorry for him."