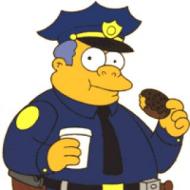 Hank, who voices several other characters on the animated comedy including Apu, Moe and Comic Book Guy, also talks about people's confusion with his name after being called Frank and once even "Hand Azaria."