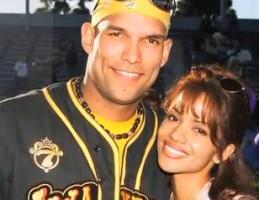 )'s ex-husband David Justice is commenting on her split from Olivier Martinez.

The former baseball star slammed the actress on Twitter, saying she tries to attack the character of the men she splits with and warns Martinez the same thing could happen to him.

Justice, who wed Berry in 1992, points out that she never cleared up reports that he abused her during their marriage and instead obtained a restraining order against him when they split even though he posed "absolutely no threat."

"Reading the latest Halle Berry reports, it wasn't me who hit Halle causing the ear damage," he says. "Halle has never said that I hit her."

"It was a former Hollywood boyfriend (WS) that she told me," he says, WS is believed to point the finger to Wesley Snipes.

"When she first reported that she had been in abusive relationships, she wouldn't name the 'famous' former boyfriend."

"She was mad at me leaving the relationship so she and her Hollywood Team just tried to destroy my character. It had to be my fault,right?"

"Yup.. Me, Eric, Gabriel and Olivier were all her 'Knight in Shining Armor', until it ends. Then we all become the worst guys in history."

"Only the guys in the relationship with Halle know the real deal.. there will be another,of course. He'll be called 'The Best' until it ends."

"Just wait,Olivier.. it's coming!," he warns. "She insinuated that her daughter wasn't safe around Gabriel.. look it up and see the reason! Just wrong."

"It just makes me mad to still see the same lie being perpetuated about the source of her abuse being me.Never happened!"

Eric Benet, who was married to Berry from 2001 to 2005, agreed with Justice on Twitter, simply saying: "My man David Justice is tweeting some truth dis' mornin'!"

Berry and Martinez announced their split on October 27 after two years together.