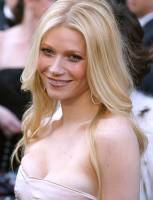 ) will be singing a version of Cee Lo 'F--k You' when she guest stars on an upcoming episode of 'Glee'.

Although the tune will be censored to a much less catchy 'Forget You'.

The song's original lyrics, about a bitter ex-boyfriend, include: "I see you driving 'round town with the girl I love and I'm like, F--k you!"

Paltrow will give birth to something of a love quadrangle when she makes her 'Glee' debut in two weeks.

"Gwyneth is coming on the show," confirms Ryan Murphy. "And even though Emma is with John Stamos' character, when she sees those two it makes her feel jealous. And that sort of launches another big, wrenching love triangle. Gwyneth will come between them, so it's a quadrangle."