'Guardians of the Galaxy' Sequel To Be Titled 'Vol. 2' 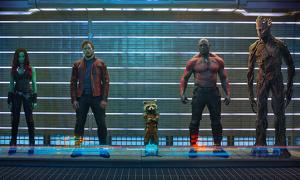 Director James Gunn has confirmed that the title for the next chapter to 2014's 'Guardians of the Galaxy' will be 'Vol. 2'.

The title was brought forth after Marvel Studios president Kevin Feige accidentally mentioned it during an interview for 'Ant-Man'.

"Yes, the official title for the Guardians sequel is Guardians of the Galaxy Vol. 2," writes Gunn in a post on Facebook.

"Kevin Feige recently let the title slip while doing Ant-Man press, which I'm really happy about because God knows I've let more than one thing slip accidentally while chattering away on this page."

"Also, hats off to some intrepid fans who figured out the title a couple of days after I posted the cover page. More than one person guessed 'Guardians of the Galaxy Vol. 2'. I wanted so badly to give you props at the time, but knew I had to wait."

Gunn didn't spill any details but said the sequel would be "a more emotional movie."

"I think it's both a bigger movie and a smaller movie because we focus more intensely on some of the characters. We get to learn a lot about fathers in the second movie, and I think we focus a lot on that," he said.

Star Chris Pratt recently hinted that the script for the sequel made him cry.

"I know some of the songs that are going to be on Awesome Mix 2. All I can tell you, because I obviously, I'm not allowed to tell anybody anything, nor would I want to, because it would be a little bit like telling a kid what's under the tree before Christmas morning. I would encourage people not to poke holes in the paper and peek. Allow yourself the Christmas morning. Don't ruin it."

"I will say that his pitch and his idea legitimately put tears in my eyes," said Pratt. "It is so good, it's so good. And I cannot wait to get started on it and I cannot wait for people to see what he's going to pull off with the second movie."

"It's so, so big and so good. From what I understand, they were like, heard it at Marvel and they said nothing. They're like, 'perfect'. There was no micromanaging of the idea, they just love it so much they didn't even have a note for it. It's going to be remarkable."