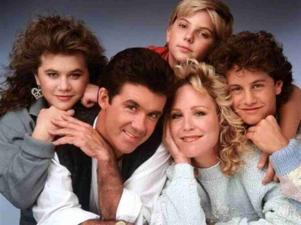 Thicke, the father of 'Blurred Lines' singer Robin Thicke and two other sons, was 69. He is survived by his wife, Tanya Callau.

The actor reportedly had a heart attack while playing hockey with his teenage son Carter. He was transported to a hospital and pronounced dead.

Speaking to the Los Angeles Times, the singer called his father "the greatest man I ever met," and said he was "always a gentleman."

"The good thing was that he was beloved and he had closure," added Robin. "I saw him a few days ago and told him how much I loved and respected him."

After hosting a successful daytime talk show in Canada, the entertainer launched 'Thicke of the Night' in the US in 1983. However, it was cancelled after nine months as it went up against Johnny Carson's 'Tonight Show'.

He most recently appeared on NBC drama 'This Is Us' and 'Fuller House'.

In a 2010 interview, Thicke remembered his years on 'Growing Pains' fondly.

"It was a great opportunity that made my life good and something that I can show to my 12-year-old now in reruns. Corny and dated as it is, it's still relatable, understandable, and he can look at it and say, 'Yeah, I get it. Now I see what you did before I was born.'"

"So if that's what goes on my tombstone, I'm perfectly comfortable with it."