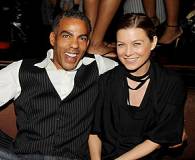 'Grey's Anatomy' star Ellen Pompeo has given birth to a girl.

Stella Luna Pompeo Ivery is the first child for Pompeo and her record producer-husband, Chris Ivery. The two first met in 2003 when mutual friends introduced them and officially got married in November of 2007.

The couple announced the pregnancy in April. This has been quite the baby month for members of the ABC show.

"It's a huge lifestyle change, and I take that very seriously," Ellen told 'Allure' earlier this year about having a child. "Chris and I enjoy our life so much. We go to Europe and sleep in."

"So when I have the baby, I won't feel like we've missed any fun, reckless times together, like staying up all night drinking champagne and having sex until five in the morning and not having to get up until two in the afternoon."