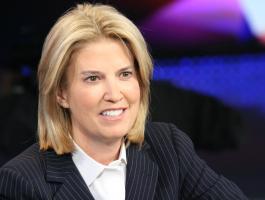 Van Susteren will host 'For the Record with Greta' at 6 PM everyday from Washington, DC for the cable news channel.

"Greta is a true pro with a proven record of tough journalism," says MSNBC executive Phil Griffin. "Her broad range of experience and sharp news judgment will be of great value to MSNBC as we build on our momentum going into a new year and a new administration."

"I'm thrilled to start my next chapter at MSNBC," says Van Susteren. "The network is the right destination for the smart news and analysis I hope to deliver every day, and I look forward to joining the talented journalists and analysts I respect there."

The host had left Fox News soon after the forced exit of CEO Roger Ailes. The move comes the same week Megyn Kelly announced she was leaving Fox News for NBC News.

Fox News has announced that Tucker Carlson, who had been in Van Susteren's slot, willl take over Megyn Kelly's key 9 PM hour.