Gregg Allman Engaged To Woman 40 Years Younger Than Him 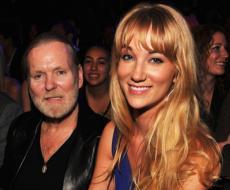 Gregg Allman, the 64-year-old founding member of The Allman Brothers Band, is now engaged to a 24-year-old woman.

But Allman, who has been married six times before and has five children, says this time it's different. He's "really in love" with Shannon Williams.

"She's becoming wife number one. I don't have a wife, I haven't had one for years."

Allman was also once married to Cher. The two tied the knot three days after Cher finalized her divorce from Sonny in 1975. They had one son, Elijah, a year later and divorced after two years of marriage.