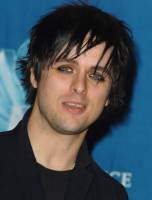 Billie Joe Armstrong may have remembered to fasten his seatbelt but forgot his pant belt.

The Green Day front man was booted off a Southwest Airlines flight over the weekend because of his sagging pants.

"Just got kicked off a Southwest flight because my pants sagged too low!," he said on Twitter after being tossed from an Oakland-to-Burbank flight for wearing his trousers too low. "What the f--k? No joke!"

An ABC news producer, who was on the same flight, says the incident took place when passengers were taking their seats.

A flight attendant approached Armstrong and asked him to pull his pants up.

"Don't you have better things to do than worry about that?," replied the 39-year-old. "I'm just trying to get to my f--king seat!"

But the flight attendant didn't appreciate the response and, after Armstrong didn't comply, had him promptly taken off the plane.

Southwest has since released a statement that Armstrong was allowed onto the next flight to Burbank.

"As soon as we became aware of what had happened, we reached out to apologize for this Customer's experience," it reads.

"We followed up with this Customer and involved Employees to get more details and, in our latest conversations, understand from the Customer the situation was resolved to his satisfaction."