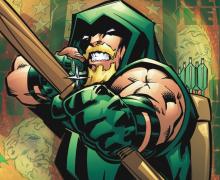 It appears that Green Arrow will soon be the latest in a long line of comic book heroes to make it to the big screen.

Reports say Warner Bros. are planning an adaptation of the DC Comics strip in which the crime fighter is stripped of his powers and thrown into a high security prison.

"He's Green Arrow for the first 10 minutes of the movie, and then he's arrested and his secret identity is revealed. They shave his goatee and take his costume then send him to prison for life," says Goyer. "It's like Alcatraz, and he has to team up with some of the very same villains he is responsible for incarcerating in order to get out and clear his name."

"Of course, tons of people try to kill him while he's in there. We've populated the prison with all sorts of B and C villains from the DC Universe."