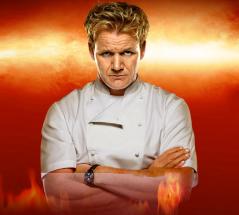 Gordon Ramsay and Bobby Flay are going to battle in a cook-off.

"Should I let you in on a little secret?" Ramsay, 49, said at Vegas Uncork’d, according to FoodBeast. "At the end of the year, we're going to go and do a throwdown."

"We're going to do the most amazing live cook-off against a chef that I've grown up with and admired for many years, but he keeps refusing to go up against me."

"You may not have heard of him," quipped the British chef, "but his name is Bobby Flay."

"I do love the guy. I just can't wait to beat his ass," he laughed.

Ramsay and Flay have been taking shots at each other since 2013 after the 'Hell's Kitchen' star said: "I've forgotten more than Bobby Flay has known!"

Flay suggested they have a cook-off at the time: "Let's settle this like men, in the kitchen! No words, just knives. Show up or shut up."

It appears that's finally going to materialize later this year.