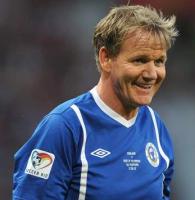 Gordon Ramsay had to be taken off the field in a stretcher after a charity soccer game got rougher than expected.

The 45-year-old often foul-mouthed chef was given oxygen after a tackle by former pro player Teddy Sheringham at the annual Soccer Aid game in Manchester, England.

"Gordon was taken to hospital after injuring his back during the game," a spokesperson tells the Daily Mirror.

"He was released after receiving treatment and although he's in pain today, there shouldn't be any long term damage."

Will Ferrell, Woody Harrelson, Ed Norton, Mike Meyers and Gerard Butler also participated in the game, which raised more than $6.4 million for UNICEF.

Watch video of the play during which Ramsay was injured: