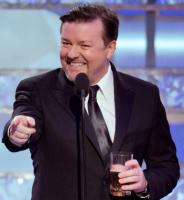 That was down slightly from last year's 17 million, but the awards show still handily beat all network competition in its time slot.

British comedian Ricky Gervais returned for his third go as host. And while many observers thought his digs were muted compared to last year, Gervais said he was pleased with how the evening turned out.

"Thank f--k that's over," he said after the show. "I had a blast actually. It was by far my favorite of the three hosting stints."

"The crowd were great this year too. I think they finally worked out that my gags only seemed rude and nasty but were actually not too scary at all. Or they were just drunker."

"I've told my agent to never let me be persuaded to do it again though," he joked. "It's like a parachute jump. You can only really enjoy it in retrospect when you realize you didn't die and it was quite an amazing thing to do."

in the 9 PM hour, 'The Good Wife' and 'Desperate Housewives' was seen by 9.3 million and 7.8 million, respectively.