'Glee's Jane Lynch Gets Married To Her Girlfriend 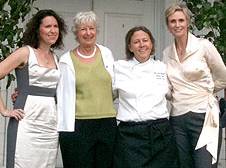 Although the actress hasn't made an official announcement, the Blue Heron restaurant in Sunderland, Massachusets confirms that the 'Glee' actress married Embry in a small ceremony on Memorial Day.

Just over twenty close friends and family attended the ceremony, which was held on the restaurant's patio. Lynch wore a cream blouse with black slacks, and Embry was dressed in a black and white cocktail-length dress.

"There were no celebrities or recognizable faces there," says a restaurant spokesperson. "It was small, warm and intimate. You could feel the love. They were very happy and there was lots of smiling."

Lynch confirmed that she was engaged to her longtime girlfriend last month.

"It's just the greatest thrill in the world to find somebody that you want to be with every day," she gushed.